The South African Film and Television Awards (SAFTAs) nominees for 2016 were announced on Thursday, and there were a few snubs!

Date My Family (season one) is up for Best Reality Show, alongside Global Wheeling (season one) and Ultimate Braai Master (season three).

Isidingo’s Tema Sebopedi and Leeanda Reddy will go head-to-head in the female category, with Binnelanders’ Brumilda van Rensburg also in the mix.

Isibaya, which has a total of seven nominations, is also up for Best Soap, along with Ashes to Ashes and Rhythm City.

But how is it possible that Skeem Saam only received a nod for Best Achievement in Directing (TV Drama)?

TV personality Minnie Dlamini and Scandal’s Masasa Mbangeni were some of the celebs who attended the nominations announcement at Johannesburg’s Monte Casino.

Masasa and Scandal were snubbed big time, and she let her feelings be known by retweeting a tweet about the judges’ decisions. 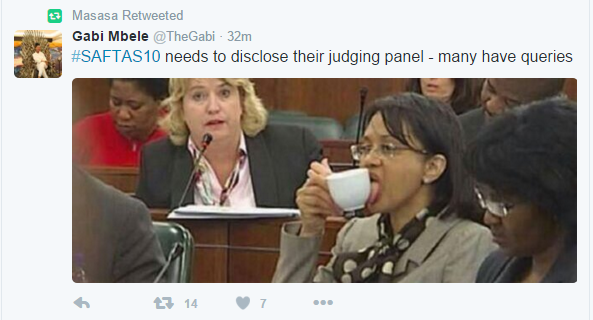 Skeem Sam was not nominated #SAFTAS#? What about Utatakho? Whose is in the judging panel?Not happy at all!

I can't and have NEVER with the #SAFTAS. ten years later, they still get it SO WRONG??

@SAFTAS1 Shocking that @MsMasasa @etvScandal is not nominated. Peep the TL and see how many are shocked. Reveal your judging panel #SAFTAS10

The SAFTAS are trash anyway... ✋😒"@TerryOnDemand: But @etvScandal should've been nominated though 😒😒😒😒😏😏😏 #SAFTAS10"